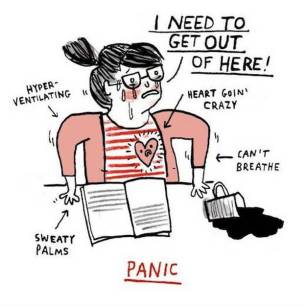 Anxiety is something so many of us deal with. Sometimes we worry if we said too little or too much. What could we have said? Did we say the right thing? What even is the right thing? Was it my fault? Am I to blame? What If I did this instead? Would it have changed the outcome?

We get so anxious and begin to overthink every life decision we ever made. If I am anxious about something it can be really obvious because I start rambling and may even say out loud what I am thinking. However, that is because I am a naturally open person and I don’t have much of a filter. But so many of us never really address exactly why we have anxiety or what it is we are anxious about. Some of us might be embarrassed or just don’t know how to express ourselves. There is no need to be embarrassed about having anxiety. According to the Anxiety and Depression Association of America (ADAA), “Anxiety disorders are the most common illness in the U.S affecting over 40 million adults in the United States, age 18 and older.”

Even if you aren’t a naturally anxious person, chances are you still experience anxiety sometimes. It’s a normal reaction to things in life whether it be because of a test, a first date, waiting to hear back about a job, financial problems, waiting on a text, and yes how many likes you got on your Instagram post. Obsessing about how many likes and comments we get on social media is something I plan to delve deeper into, but feeling accepted on social media is something I will address on a later post.

Anxiety is actually a very common thing that many people deal with in their everyday lives. Some people have it more extreme than others and it may affect their everyday routines. In those cases, I believe it is helpful to speak to someone and to find something you love that you can channel your anxiety into. If your anxiety is caused by a traumatic event in your life then please do not try to repress it. Repressing bad memories will only make things worse. Believe me, I have been there and I have close friends who have too. The best thing to do is to confront it and talk about the event no matter how hard it might be. For more severe cases, there is medication that can be prescribed and no one should feel ashamed about that.

There are so many different forms of anxiety such as post-traumatic stress disorder, generalized anxiety disorder, obsessive-compulsive disorder, numerous phobias, social anxiety, and so forth. Some people don’t even realize how much their anxiety affects their everyday decisions and behaviors. If you find yourself constantly jumping into unhealthy relationships, have low self-esteem due to being overwhelmed by tasks at work or school, are afraid to be in social settings due to various scenarios in your head, turn to alcohol or drugs to calm yourself down or are constantly questioning yourself…then you may want to take a step back and think about why you are feeling the way you are and how you can respond in a way that does not make you more anxious than you already are. Responding to your anxiety in an unhealthy way only makes things worse when you should be trying to make things better. It is the same with stress and depression. People who feel overwhelmed are more prone to these behaviors and the pressures from society to be “perfect” do not make it any easier. Below, you will see a list of more efficient ways to deal with anxiety.

I consider myself an anxious person but more so in the way that I overthink situations and constantly question myself like most of us do. Instead of staring at your phones all day as you wait in anticipation for a text or instead of over practicing a routine for your tryout, you should find something else to focus your time on. For me, writing is what helps me get out my anxiety (surprise, surprise!!). For you, it may be going to the gym, learning a new recipe, or simply just surrounding yourself with friends to distract you. It is the healthiest way to deal with anxiety and other things, such as depression and stress. When you do something that makes you happy, you forget about everything else even if it is for just a moment and that helps for a healthier and more positive you!!

7 things I do to deal with anxiety:

What are some things you guys do to deal with anxiety? Do you have any tips? If so, comment below!

In honor of April being Sexual Assault Awareness month, I am sharing with you a very personal poem I wrote about one of my friends. My close friend was sexually abused by his father for almost his entire life. Many do not realize how many boys are sexually assaulted because the focus is primarily on girls. According to 1in6.org, 1 in 6 men have been sexually abused or assaulted.

By the time my friend came forward with what had been going on behind closed doors, it was too late. The pain was too much for him and he took his own life. This poem is in the point of view of him. I am a very empathetic person so I was able to put myself in his shoes while writing this. For some of you, this may be a very tough read.

IF YOU KNOW A VICTIM OF SEXUAL ASSAULT, SPEAK UP.

YOUR VOICE COULD SAVE A LIFE.

Prisoner in my Own Home

Most don’t think that rape,

Can happen to a boy,

Little did they know,

I was my father’s toy.

Oh no, he’s coming up the stairs,

And hope that god can hear my prayers.

I’m a mess of sweat and tears,

He slams open the door,

Out of nowhere he appears.

The smell of sweet liquor and smoke fill the room,

I can no longer breathe,

My lungs are filled with doom.

He throws his first punch,

And I try my best to duck,

But he’s too quick,

And I’m out of luck.

As I fly back,

The concrete floor catches my fall,

I think my back is broken,

I begin to bawl.

No way to escape,

No matter how hard I tried.

He drags me by my shirt,

And forces me on to the bed,

He rips off my clothes,

As I attempt to fight back,

I wish I were dead.

She’s too scared to call the cops,

So she starts throwing chairs.

She knows what daddy is doing to me,

For he beats and rapes her too,

But she is beside herself,

And pretends that what daddy is doing isn’t true.

Daddy is a monster,

For I see the evil in his eyes,

As he touches me aggressively,

I know he’s the devil in disguise.

I swim in a pool of my own tears,

As at peace the neighbors sleep,

So I continue to weep.

My innocence was taken away,

At just the age of three,

A prisoner in my own home,

And it’s still the same abuse,

For the bruises and cuts,

I always have an excuse.

There is so much pain within me,

So I beat myself up more,

By slicing my skin open with knives,

And watching the blood from my wounds pour.

I think it’s time I tell a teacher,

So the abuse can be put to rest,

But I’m afraid no one will believe me,

And think I’m just a pest.

Eventually I built the courage to rat my daddy out,

And he was put in jail,

I thought I would feel better,

But I still felt so frail.

After all I have gone through,

I knew earth wasn’t the place for me,

So I sent myself to heaven,

Where a good life was guaranteed.