Below is a poem I wrote in high school. Read further down to see what I have learned since writing this. Accept yourself for all that you are…I promise that you are enough.

I am a monster,

Maybe not the type that little kids think are under their bed,

Or the kind that does evil things,

But the kind that self-destructs.

I constantly beat myself up with negative thoughts,

The ones that leave you with a pounding headache,

And leave you in a puddle of your own self-weep,

The ones that keep you from sleeping at night.

I tell myself I am not good enough,

Torturing myself every chance I get,

Letting all the negative energy slip right into my skull,

Releasing all the good left in me.

What I’ve learned since writing this…

We all tend to be our own worst enemies. We are always concerned with what other people think of us because we assume that they are already judging us. More often than not, the only person judging you is yourself. And if other people are judging you than they are either jealous or are tearing you down to make them feel better about themselves because of their own insecurities…so in actuality, you should be feeling bad for those people. Those are the people who are the unhappiest with themselves. The people who put other people down to make themselves feel better have more issues than you and probably need some help of their own.

So in reality, it makes me laugh when I see someone judging another person because that person who is judging is trying to come off as the dominant, strong one when in fact they are nothing but weak. A strong person can be someone who has just as many insecurities but sees another person and admires their beauty, their confidence, and their talents. In my opinion, that is the definition of a strong person because even if they are not happy with themselves, they will not take down another person just to make him or herself feel better.

Instead, a strong person will praise someone else’s success and want to watch them keep learning, growing, and succeeding despite whatever is going on in their own life. Be that kind of person. And stop beating yourself up because your biggest enemy is you. You need to stop tearing yourself down and you need to start building yourself up. And for those of you tearing other people down to make yourself feel better, stop for a minute and think about how weak a move that really is.

Rather than tearing that person down, build that person up just like you would want someone to do for you. STOP being the monster you see in your head. START being the person you want to be. Don’t let other people get in your head. Don’t let the fear of what other people think of you ruin the perception of yourself. You’re better than that. Be the strong person I know you are. 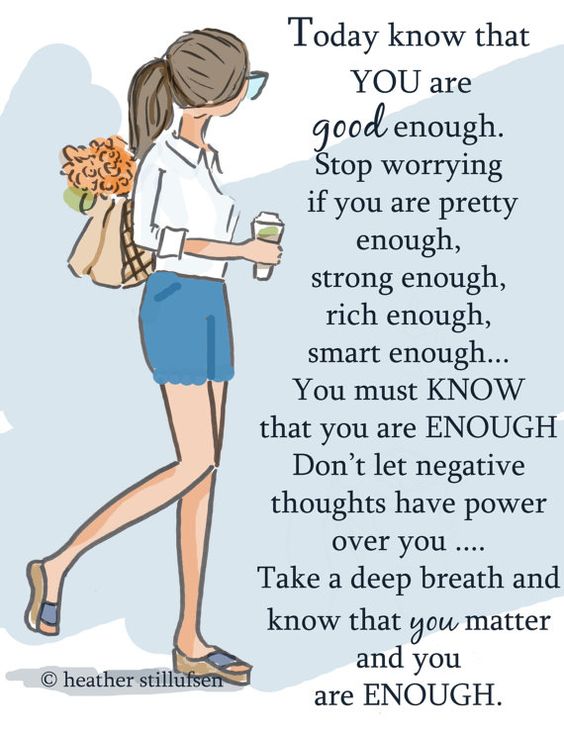